I am starting to think about display methods if these slugs continue on their orbit to Platina. They seem naturally inclined to pile up together, but if they pile up together, what would happen to the strings.  Originally (back in March) I thought about having them scattered around on a wall with the strings hanging in a bunch off to the side and this may be the best solution to make the piles look better, although due do gravity, they would have to be on a flat surface.  I felt that the test run at Masterworks with silver slugs was a bit too directive – but then I wanted to have control over how they were strung and knotted – maybe I need to relinquish control here. Can people be trusted to tie knots with the right amount of string tail hanging out the back? Probably knot (sic).

Practical considerations: If I want to display them in clusters and I want them to have a small hole then I need to make it easy for the purchaser/gallery to string them up.  I wonder if I could attach a needle like device to the string with a 3D pen to make it easier to thread. If they must be knotted in a particular way then maybe I need to supply instructions or an instructional video. Damn! I have just realised these look a bit like WF/KF sinkers when they are piled like this – I will have to rethink. Did this slip in subliminally or are they totally different?

I am participating in a makers mix tape project curated by Kristin D’Agostino where we respond to a song each month.  The zinc and tin slugs came in handy for April’s song.

Making slugs and asteroids like this came at a time when I needed to make 30 or so earrings for the Objectspace fundraiser, so naturally I used the same method. I actually made similar creatures back in 2008 with soldered posts, but merging wire into molten blobs is so much more fun. 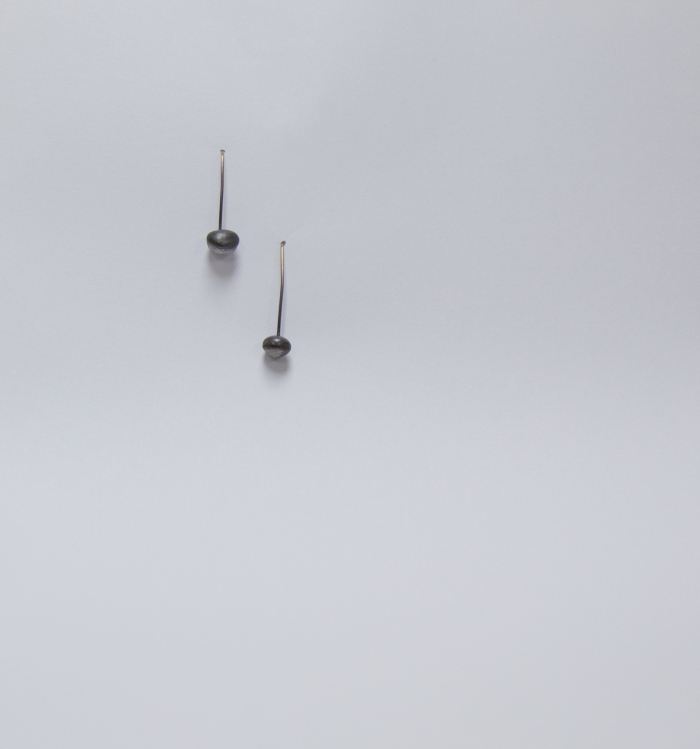 Perhaps some meteors need to fly to Platina as well. Are meteors better than slugs?  Can slugs become meteors if melted in a bigger deeper dip? With jump ring merge rather than hole? Hmmm.