Things yet to be made

Collaboration date #2 picked up from where we left off after a cup of coffee and a biscuit. We placed all the works that were pretty much done on one table and all the things that had yet to be resolved on the other.

The large bag of bits pendant was restrung with fat red cord I had found across the road from work. It can be worn with the cord doubled up or as a single strand – both options have very different ride heights with the former being slightly more practical and the latter bouncing upon ones knees. We could not decide which option was better. Either way, the piece was done. Done.? Yip Done.

The bunch of creatures on green stars only needs a pin – we ruled out making it a pendant, it is definitely broochy. I finished sewing up the knitting neckpiece. Lisa had been working on a bit of handbag strap bracelet in my absence.

I did a glue check on the plastic lei bowl guitar piece I made last time – pass. The comb tray combo had failed earlier. That’s quite brave, she said about those two pieces. Ha.You reckon? I said. They are so simple… No one would stop there, she said.

We looked at the pile of things to be made and decided that we had enough material to work with today – there was no need to go shopping again. The green picture, orange picture and wooden spoon that had been put together last time were reintroduced to each other and I placed a yellow cord with them.  We arranged them and rearranged them as the day went on.  They had potential but the arrangement wasn’t quite right yet. The colours and forms work well together. 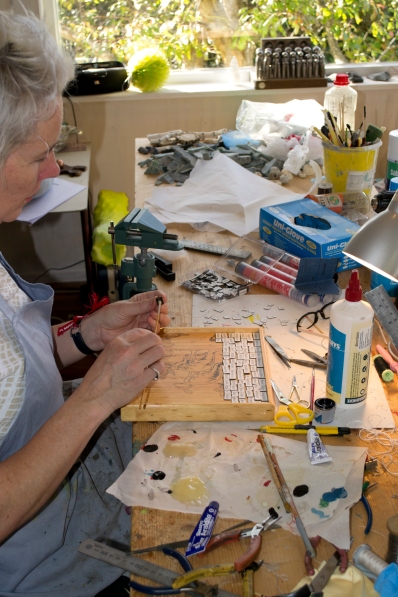 We decided the yellow shoelace that came in a spiral was perfect just the way it was – it just needed a pin – and maybe some glue to hold it together. Done.

The pile of plastic plates and the green goo had something special about them, especially when the fluro pinky orange string was nearby. It needed something else though.

Lisa read out the poem she was writing in fridge magnets on the kangaroo platter.  You could win a literary prize with that, I said. We laughed. She probably would.

We discussed how the pieces were to be signed.  Lisa normally paints the signature on in lacquer because permanent maker can fade. I dont sign my work. Walker Fitness or Fitness Walker? We had a little giggle about that.  We could enter them into Schmuck as Walker Fitness, I said. No no, we could have a solo show in Munich, she said. We also discussed what would happen to these works in the future, like if one of us wanted to include them in another show sometime. She has worked collaboratively before so said this would be fine as long as they were credited properly, like she does with Chicks On Speed pieces. These works are by the artist Fitness Walker.

I stared at the things yet to be made table for a while trying to find the next piece to make. The happy pasta servers kept smiling at me but they did not speak loud enough. I moved the green painting over the orange picture and hung the spoon over the side a bit, kinda using the rule of thirds. It looked better.

I picked up the pile of plastic plates again and put them on the floor with the cup of green goo and the fluro string. It needed something else. I saw the two cocktail knives in on the table and yanked them out of their packaging. Oranges or grapes? Grapes or oranges? Or both? What did Lisa think? She liked the way the green grapes mirrored the little green goo balls, but then the orange was nice too. We decided on both. I decided to plait the fluro cord LW style to make it thicker. Done. It was getting late in the day and I was going to pack everything into my suitcase soon so we decided on super glue. I wondered if this would be strong enough, but then remembered the 1980’s advertising campaign. If it is strong enough to hold elephants it will be good enough for this aye.

Lisa liked the new arrangement of the green painting/spoon/bedspread combo.  It was working now.  I wanted to pierce the cord through the yellow canvas so that the pendant had a line of yellow in it.  Lisa said she would normally hide the cord. She thought it was important to hide how the spoon was attached to the orange bedspread fabric.  I agreed. After thinking for a few seconds about how to join the picture frames together, I nailed it.

Lisa re-glued the wooden comb to the tray and added a slim grey plaited cord. Perfect.

The finished pieces table at the end of the day.

The bits that didnt make it – yet.

The pieces we had made today were looking good on the table together with the pieces we made in the first session.  There are a few works on the go which may be added to this group and we may edit one or two things out when we install the show at Objectspace. It will all depend on how it looks in the gallery. We think it is better to have an abundance of things to select from than not enough.

The things that haven’t be made into anything are a pretty dry bunch although they are not rubbish. I am sure Lisa will use them for something one day.  I put the Noon Passama thing on the reject table because it was just too kitchy. Lisa agreed. You have to be careful about being too kitchy with these kinds of materials, she said. Yup.