Lisa Walker and I went Op Shopping in Newtown. We decided to buy anything that caught our eye and many things did. I was curious to see whether she would notice something I had seen – sometimes yes, sometimes no. The op shops in Wellington are so much better than in Auckland – it was great to go exploring on her home turf. The first shop had some great object arrangements. One grouping I found only needed some glue and a pin. Lisa found a black tshirt with Maori design; ‘You wear black a lot aye Sharon’… The second shop was a bit more punk rocker. I found a colourful tube with a spring coming out of it on a high shelf. Curious to know where the spring led to, I pulled it down greeted by a roar and thunder and a crashbang as the spring flung down and collided with my bag strap. Customers stopped and looked my way in astonishment. What was that noise?  I had found an aboriginal sound machine, probably more touristy than vintage. The long haired shop boy who we suspected was a bit of a music geek had a look of longing and loss when he realised that such a cool sound machine had slipped from his grasp. The third shop obviously belonged to a hoarder. There was only a slim passageway surrounded by stuff piled upon stuff including a few road cones that had been thrown on top of the pile like cherries – if there was cool stuff in here we could not get to it, so we left fairly quickly. The forth shop contained many interesting things including something I deemed to be a large neckpiece that only needed a longer string. 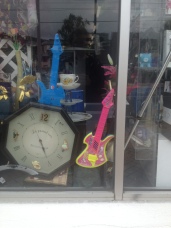 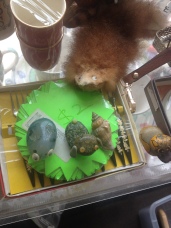 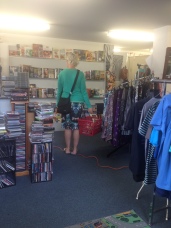 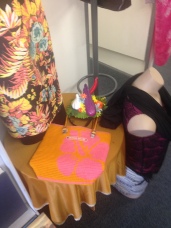 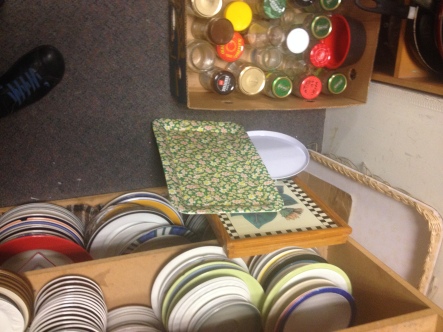 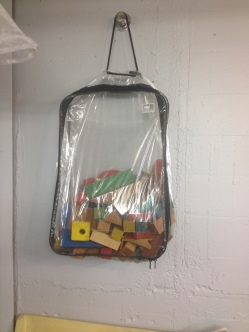 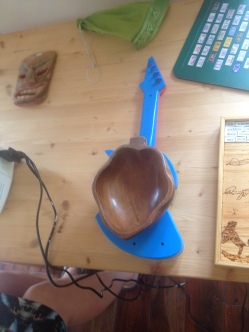 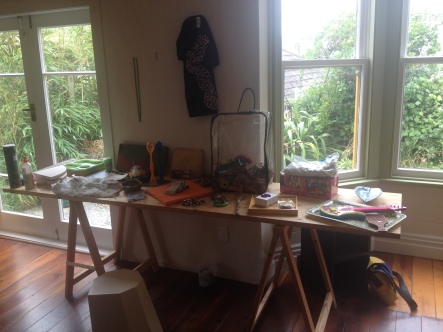 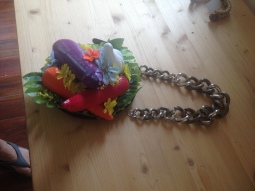 Back at Lisa’s amazing new workshop we put everything out on the table and started placing things together.  Some things were readymades – perfect just the way they were. We combined other things, recombined them and discussed what happened with each change. Components moved around the table a few times. More table space was required so Lisa put boards down on the floor.  ‘Are you gonna take that mop head out of the blue plastic bag or leave it in there? That is a very nice blue…’ Lisa thinks she may have a can of blue in the kitchen. The accidental pairing of the wooden afro comb on the floral serving tray sealed its fate – it looked perfect just like that. I hesitated about removing the yellow shoelaces from their plastic baggy thinking they looked perfect in there but the need for a yellow cord for the sound machine was greater. Karl couldn’t believe the noise was coming from such an innocent looking blue tube and said it might be the greatest piece of jewellery ever made. Yeah nah, I thought, but who am I to doubt him?

After a bit of maybe this and maybe that, the plastic vegetable fascinator and the Noon Passama-ish costume chain found themselves together. Lisa wrote magnetic fridge poetry on the bamboo poker-worked kangaroo tray/picture. The box of Hastings-McFall-ish plastic lei’s supplied the cord for the guitar-bowl combo. The black tshirt had a date with the sewing machine. Our end display at Objectspace is already in the conversation.

At the end of the session we both worked on the arrangement of a large knitted Shelly Norton-ish piece that Lisa had found at the end of a ball of shredded plastic bag string. This piece was a true collaboration where every decision was a joint one and we both offered up ‘what-ifs’. Magic!

Our stash of goodies is waiting at Lisa’s workshop for our next playdate.  We will brooch back things and string things in process, make some more things from our haul and maybe, if needed, visit the shops again.

Notes on this collaboration: I am very excited to be working with Lisa Walker in Lisa Walker ways. This op shopping and assemblage method is very much her modus operandi and not very much mine (although I do also find treasures in op shops sometimes). It is the one thing I really regretted not doing in Handshake 1. I feel our relationship has changed with this exercise; we are approaching it on an even footing and we have both contributed to every piece to varying degrees. We discuss the me-isms and her-isms that effect our decisions when they noticeably stand out. Both voices are equally heard. It is an adventure. It is interesting. We are having fun.