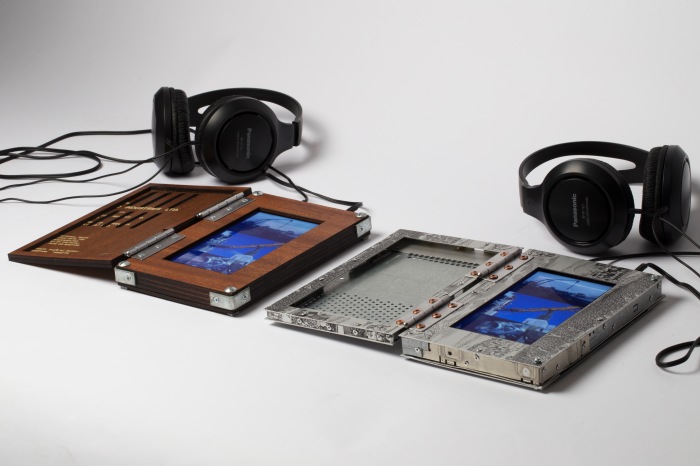 Sarah Walker-Holt and Helen Britton, Build It Up/Tear It Down, 2016. Photo Sonja Gardien 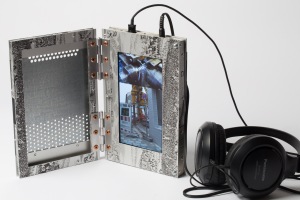 True collaboration is a very tricky thing. Its also not every bodies cup of tea, and
understandably so. It means giving up control and knowing the partners working processes very well, not to mention trusting their intellectual capacity. Forced collaboration is more or less impossible and only chance can save the parties involved from disappointment.

When we decided to collaborate it was clear that after over two years the common ground was fertile enough for good chance that something would grow naturally. Having both done films and mechanics in our other lives this seamed like the most interesting set of parameters to work with, as we had already been talking jewellery for a while. We set a few simple rules in place – Sarah: wood, Helen: metal; recycled materials, object of similar dimensions, 2 films each, 4 all together, mixed independently and the objects build in opposite hemispheres, although the hinges bought together on a short hardware shopping spree in Munich. And as good things usually evolve naturally, so it worked out, Sarah finding an old set of speakers for her wood, Helen an old car radio, so sound also got involved. The films themselves referencing the constant cycle of construction and deconstruction of the material world. The printed romantic pictures found in a junk shop initially for their aluminium show an idealized picture of Stuttgart, a German city renowned for its industrialization and production of fine machinery the consequence of which lead to its destruction not only of a romantic ideal beforehand but also to its complete destruction from allied bombers at the end of the war. A coincidental but incredibly appropriate metaphor for the great material cycles of construction, destruction, of consciously making and pulling apart with reference to history, that reappear in the work of both these artists.                 –Helen Britton June 2016 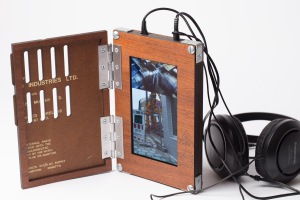 The object and films we each present, sitting alongside one another, create a visual dialogue that references the deliberate similarities and subtle differences that arise from collaborating over a vast distance and interpreting one another’s imaginings via the developed rules that were initially set.  With this in mind, how can you ultimately communicate everything like you’re sharing brain tissue, so as you don’t misinterpret anything?

Helen and I gave ourselves constraints to both abide by so that the work becomes visually unified once it is physically together. Although these started communally as verbal precincts, through necessity of experimenting with material processes, I initially constructed the preliminary prototype that by notionally deconstructing, gave us both diagrammatic parameters to work by when constructing our individual object. As I haven’t previously had any real experience with drawing diagrams from which something is to be made or interpreted by someone else, I have a new appreciation of technical drawings and I am now more aware of the pit falls. When there are internal and external measurements and materials with different qualities needing alternative technical processes, it makes it very complex; communication paramount to the partnership.

In turn Helen shared a short film, prompting my response and beginning the other set of shared guidelines as another component. This example of us passing back and forth our individual progress has stimulated a system of reactions that are of a balanced nature, both of us giving fairly and allowing us to build. Simultaneously, our individual positions as collaborators has fallen into place naturally, Helen gently centralizing us with her knowledge and myself querying, creating a dialogue that works; a natural discourse that is relevant to our separate experiences and positions as makers while inspiring both our thinking collectively.

Collaborating hasn’t been what it first appeared; a one way street where we’re both heading in the same direction for the same destination. Instead it’s is an intersection, a round-about, a place where we come from different paths, momentarily deciding left, right or straight ahead and who makes the next move, no matter whether we are the Fiat Bambina or the Ferrari, until we meet again at the next intersection. The island of the round-about acting as the neutral, fertile ground from which this collaboration has grown. -Sarah Walker-Holt June 2016